Welcome to Immaculate Conception Cathedral Parish.  We are located in the beautiful town of Grand Falls-Windsor, NL.  We are a large parish family welcoming all parishioners, visitors, children, elderly, new Canadians, and returning Catholics.  Please join us as we journey together in prayer, loving God and our neighbour every day.  May this site be an effective instrument to enhance our faith in God, and enrich our love of the Church. 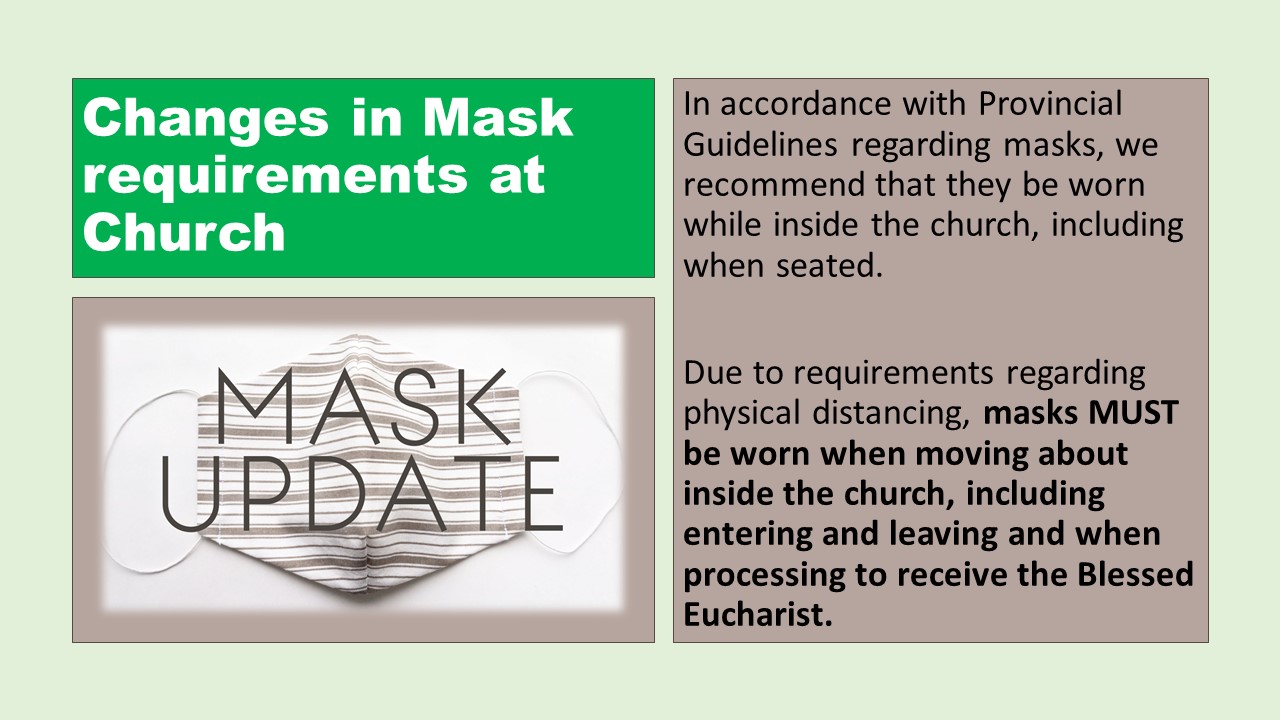 Dr. Janice Fitzgerald, The Chief Medical Officer of Health for NL recommends wearing masks while in church, even when seated. The changes in the guidelines state that masks MAY be removed once seated. This is further stated by Bishop Daniel's in his August 12 letter to Priests and Pastoral Leaders (https://c41bdb1c-3602-4b11-be89-623d9cbfcf69.filesusr.com...). To be clear though, whether or not you take your mask off when seated, is entirely your choice and will depend upon what you are comfortable with knowing your own personal situation at this time.
At the Cathedral, masks MUST be worn while moving inside the church (eg. entering and leaving, going to the washroom, going to the Ambo and going to Holy Communion) because physical distancing cannot be maintained. Indeed, at the time of Holy Communion everyone in the procession comes within 6ft of other parishioners and most definitely within 6ft of Father Joseph. Therefore, masks are REQUIRED at these times.
We hope this clears up any confusion. 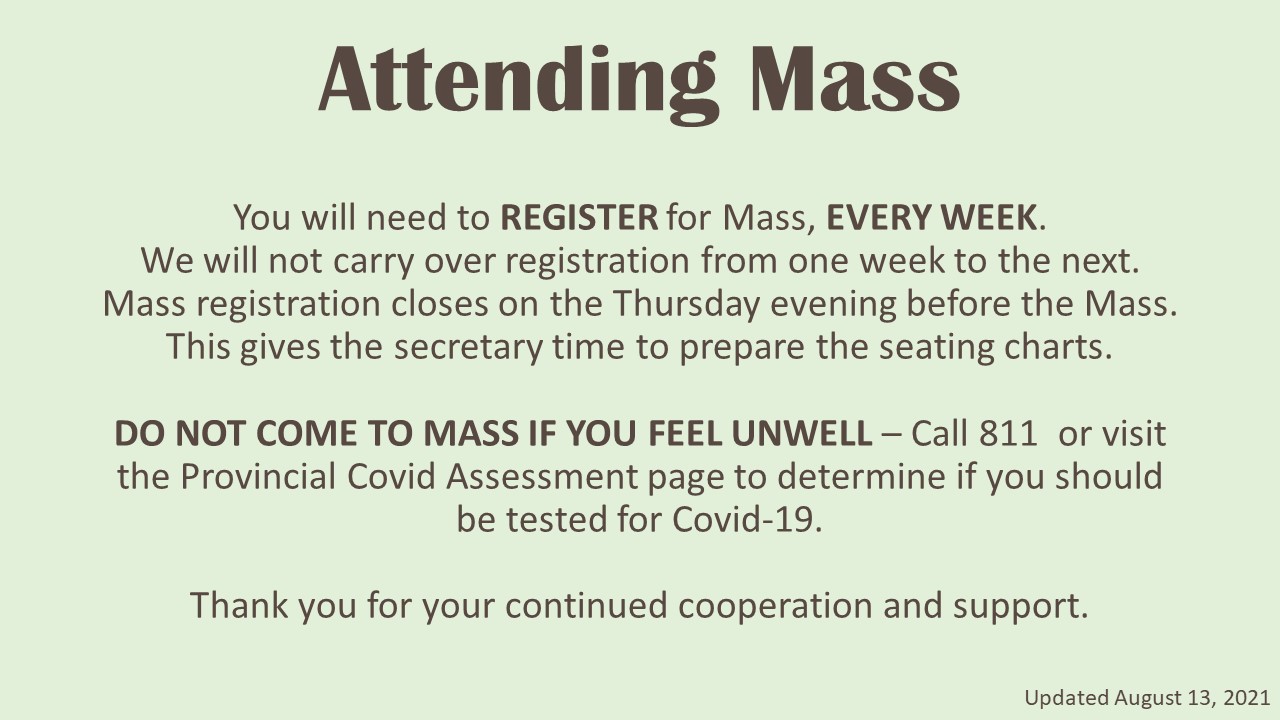 Parish Office has reopened to the public.

We ask you to please call to office to determine if visiting is absolutely necessary.  Parish staff will still be available to answer the phone during regular office hours.  If you wish to drop off a donation envelope or other item, you can still call the office in advance and, when you arrive, place it in the basket on the door.  If you need to pick something up, the same applies.  Please call the parish office and your item will be placed in the basket at the time you indicate.  Please do not leave items in the basket without first calling the office. Never leave anything in the basket outside of regular office hours - 8:00 am - 4:00 pm, Monday through Friday.

WORLD DAY FOR GRANDPARENTS AND THE ELDERLY: July 25, 2021

Link to Prayer - will open in a new window

A Plenary Indulgence has been granted on the occasion of the World Day for Grandparents and the Elderly. The elderly can obtain an Indulgence by participating in one of the Masses celebrated on the occasion of this World Day. In view of the continuing health emergency and the fact that some elderly people are unable to attend Mass in person for health reasons, the Indulgence is extended to those who participate via television, radio or the internet.

The Indulgence is also granted to all those who perform a ‘work of mercy’ on this World Day by visiting an elderly person who is alone. In places where visiting in person is expressly forbidden by the public authorities in order to avoid contagion, it is also possible to obtain the Indulgence through a virtual meeting.

An indulgences is defined as "the remission before God of the temporal punishment due for sins already forgiven as far as their guilt is concerned." The first thing to note is that forgiveness of a sin is separate from punishment for the sin. Through sacramental confession we obtain forgiveness, but we aren't let off the hook as far as punishment goes.

Indulgences are two kinds: partial and plenary. A partial indulgences removes part of the temporal punishment due for sins. A plenary indulgence removes all of it. This punishment may come either in this life, in the form of various sufferings, or in the next life, in purgatory. What we don't get rid of here we suffer there. [source: https://www.catholic.org/prayers/indulgc.php] 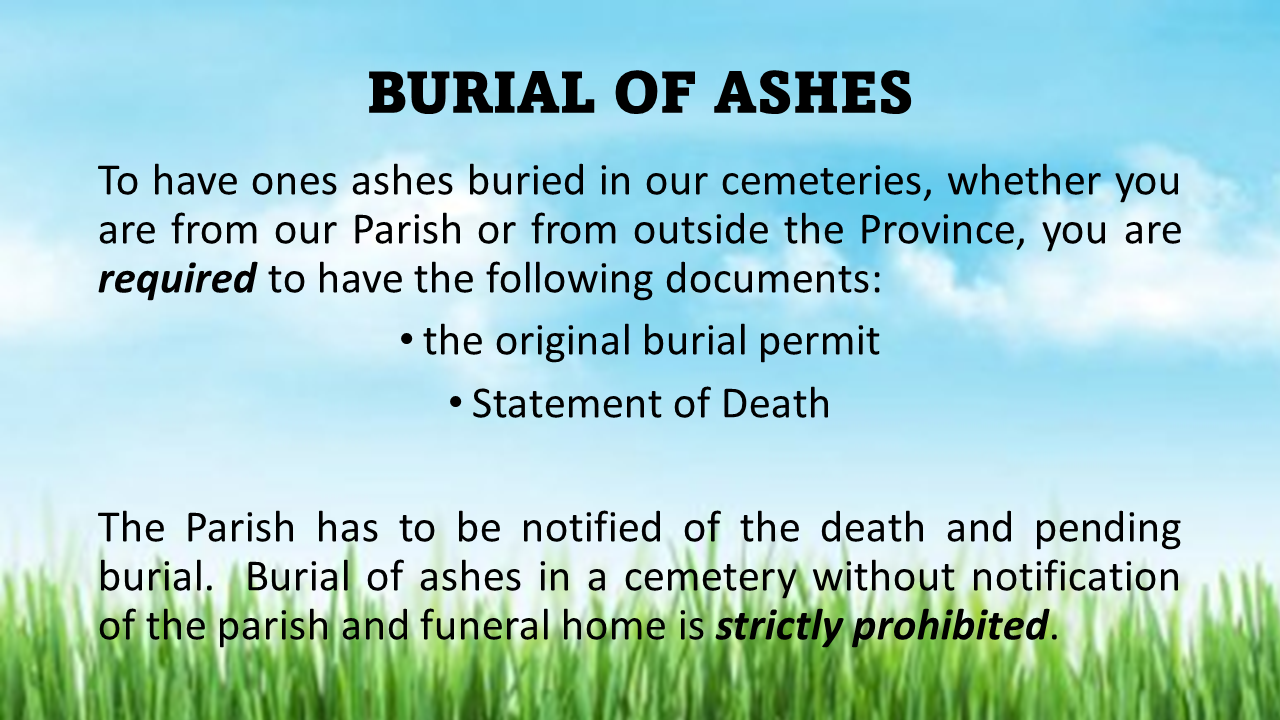 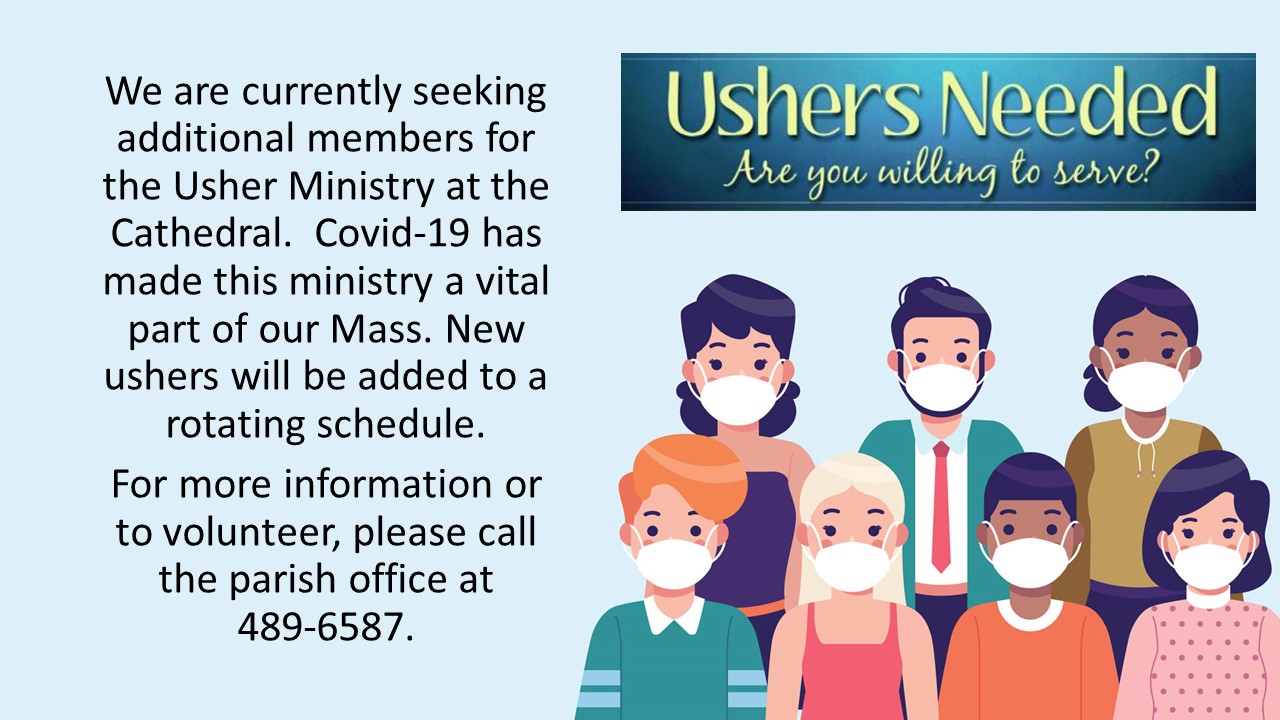 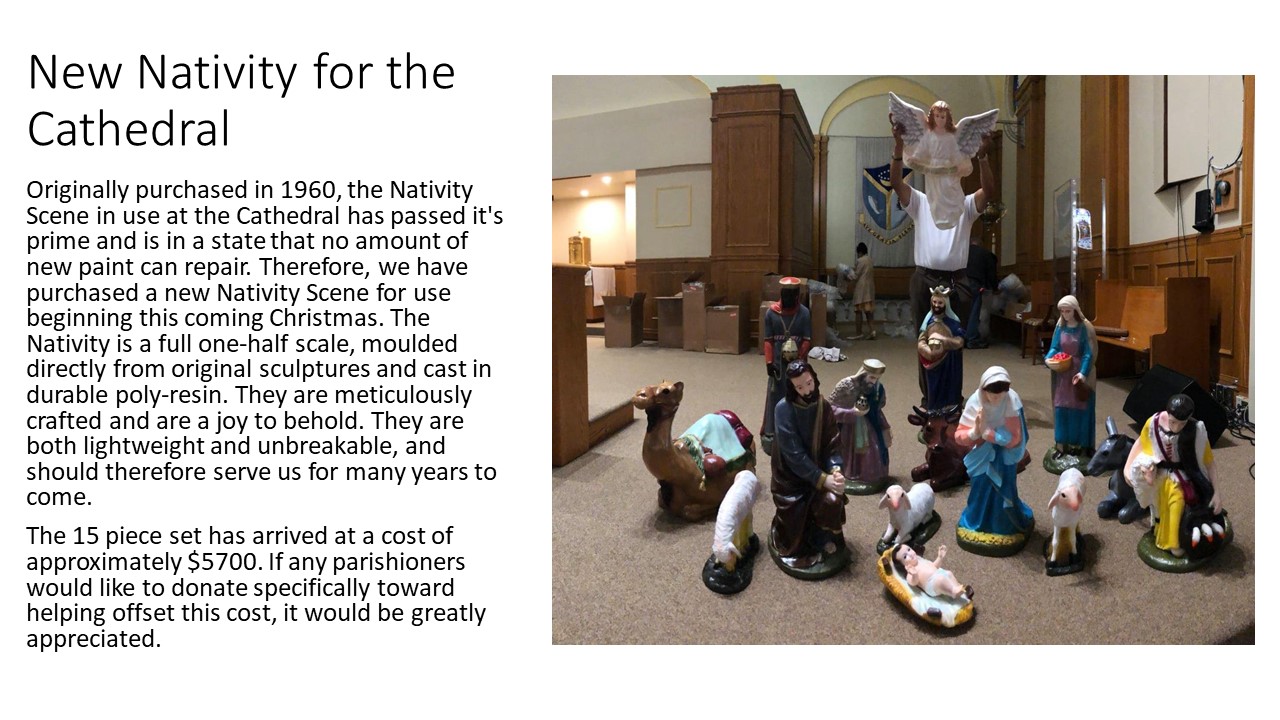 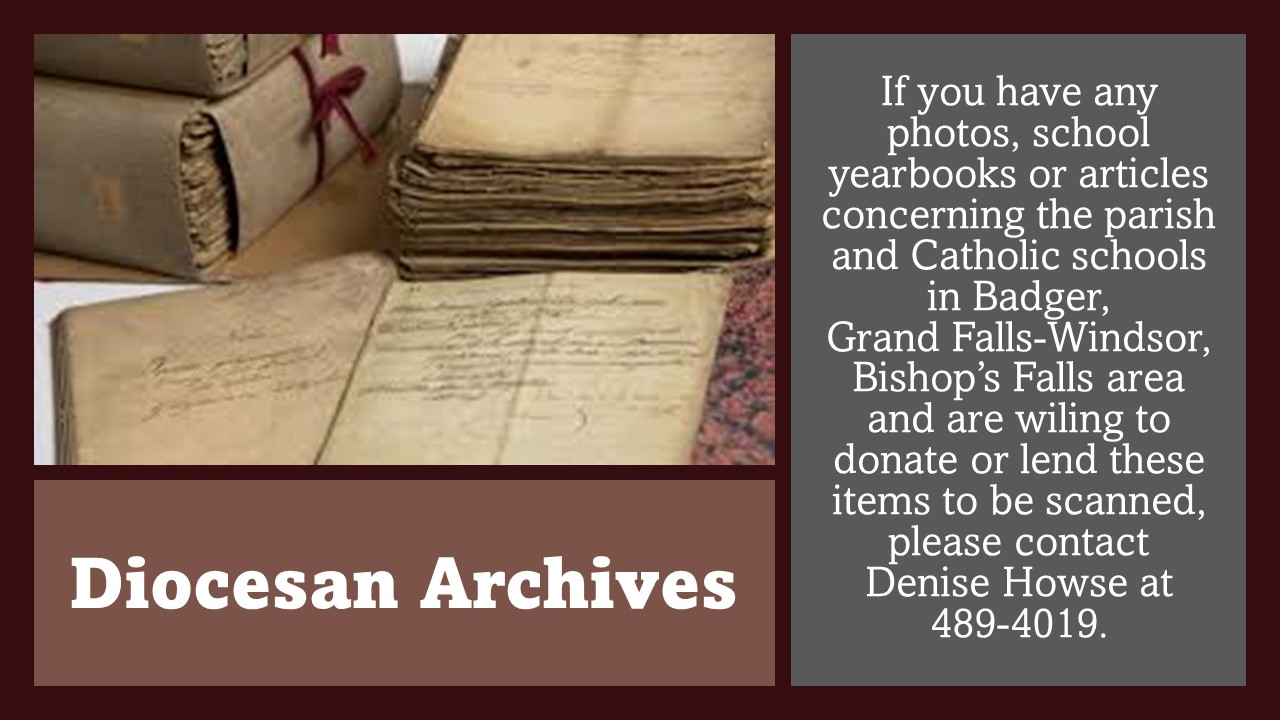 Immaculate Conception Cathedral Parish Church continues to follow the directive issued by our Provincial Health Authorities to ensure not only our safety but that of all those entrusted to our care and all our fellow citizens. Please stay safe. God bless

Bishop Daniel's reiterates that churches of the Diocese of Grand Falls located in the communities now in Alert Level 4 are closed and will remain closed until we can have attendance of at least 50 people.
https://www.rcdioceseofgfnl.org/news-events

These are instructions specific to churches in our Diocese.  This format was necessary as there are times when parts of the Diocese may be at different Alert Levels.  This 'simplified' format will help guide planning and preparation for the safety of all ministers are parishioners. To read the document please click here.

Covid-19 Diocesan press releases from 2020 can be found under the Covid-19 tab at the top of this page, or by clicking here.

In a letter to all priests and pastoral leaders of the Diocese of Grand Falls on May 6, 2021, Bishop Daniels announced that "Acting on the direction of the Holy See, the Catholic Bishops of Canada have launched a National Reporting System for people to report allegations of sexual abuse of minors and vulnerable persons committed by a Bishop or allegations that a Bishop attempted to cover up allegations of sexual abuse. It is important that this information be shared with the people of our Diocese."  The information is below.

Clicking on photo will take you to the reporting system page. Link will open in a new window.

Wednesday to Friday at 9:00 am

Wednesdays to Fridays at 9:30 am

Exposition of the Blessed Sacrament, Adoration and Benediction Wednesdays at 3:00pm

Masses and Rosary or Holy Hour are live-streamed at the times noted above.  Live video will appear in the space below.