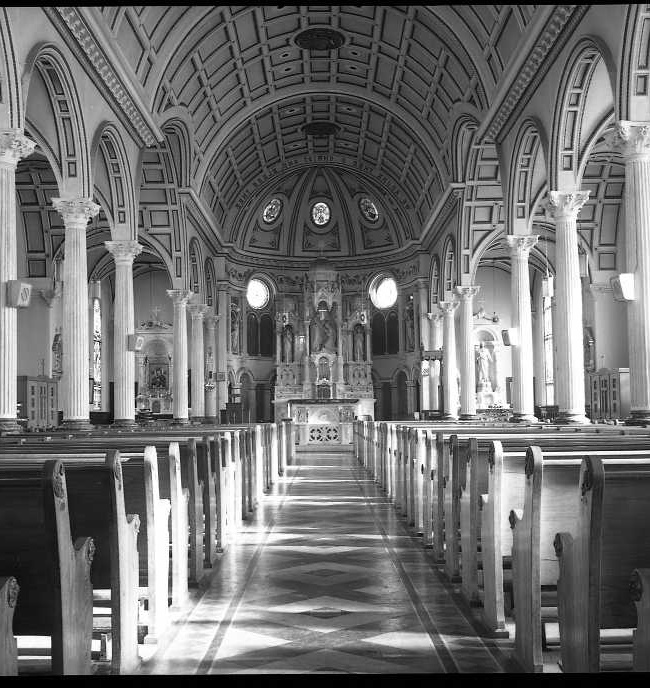 When the A.N.D. Company began operations in Grand Falls in 1905, people from all over the Island began moving to Grand Falls, some of whom were Catholics.  Fr. Gregory Battcock of Whitbourne was given charge of the mission of Grand Falls.  He built a small Chapel, which was later used as a school.  The first historical evidence of a Catholic church in Grand Falls can be found in the journal of the Rt. Rev. John March of Harbour Grace.   Bishop March blessed the new Chapel, dedicating it to Notre Dame or Our Lady on August 8, 1909.   There is no known picture of this Chapel.

On September 30, 1909, Fr. M. P. Dwyer was appointed to the mission of Grand Falls as a Curate of the Very Rev. William P. Finn (Not Msgr. Finn) of Whitbourne parish.  In 1911, Father Dwyer built a larger wooden church and school. In June 1912, the mission of Note Dame was canonically raised to parish status with the Rev. William Finn appointed as first parish priest.  On July 1st, an indenture of land on Church Road was sold to the Harbour Grace Diocese.  Mr. Herbert C. Bailey signed the document on February 26, 1913 as a witness to the stamping of the A.N.D. Company seal.  this land was most likely used for the parish Presbytery.  Another piece of land parallel to the church was leased from the A.N.D. Company n May 5, 1914.  Construction started shortly after.  The school, Notre Dame Academy, was officially opened the same year.  On May 6, 1918 the wooden church burnt to the ground and according to some sources half of the school along with it.  Episcopal approval was granted to build a new church.

The corner stone of the new church was laid in 1920.  This church was Romanesque in style. It took the parish about 25 years to complete, starting in 1919 and finishing with the completion of the steeple in mid-December 1944.  The steeple was topped with a nickel-chromed cross.  The interior of this church was graced with a Carrere altar, paneled and shaded by a variety of coloured marble.  Like the rest of the church, it was Romanesque in architectural style and from the base to the cross reached a height of twenty-five feet.  There were three hundred and sixty-two pieces in the Altar, some weighing over one ton.  It was erected by two men from St. Mary's - Mr. Edward Bonia and Mr. George Lee, under the direction of Fr. Finn.  It took a total of two months of tedious and strenuous work to complete.

Under the central canopy was a statue featuring the fifteenth mystery of the Rosary - the Coronation of the Blessed Virgin Mary.  On either side, under smaller canopies, featured two highly artistic angelic statues.  This beautiful masterpiece was bought in Petra Santa, Italy and donated to the parish by the parish Altar Society in 1926.  Its estimated value at the time was $30,000.  On March 25, 1927, it was solemnly consecrated and dedicated to the Immaculate Conception by Bishop March, who immediately after the ceremony offered the first Mass on it.

With the approval of the Sacred Consistorial Congregation, the church of the Immaculate Conception was elevated to Co-Cathedral of the Diocese of Harbour Grace on May 30, 1953.  This was the beginning of a decade long Episcopal move from Harbour Grace to Grand Falls. The first Pontifical High Mass was offered on our Patroness's feast day, December 8th.  On September 6th, Father Pumphrey was transferred and was replaced by the Very Rev. Joseph W. Peddle.  Father Peddle inaugurated the first canvas fund in 1954 which lasted until 1957.  The money was raised for the new Bishop's Palace (built in 1955 by j. Goodyear and Sons Ltd.) renovations in the Co-Cathedral, new lighting system, new Cathedra, new pulpit, new loudspeakers, new confessionals, new roof for the church and construction of a new regional high school.  With the approval of the Holy See, Bishop O'Neill permanently left Harbour Grace and took up residence at Grand Falls in June 1955.  Fr. Peddle, as Rector of the Co-Cathedral and Chancellor of the Diocese was appointed Vicar General of the Diocese and raised to the rank of Monsignor by Pope Pius XII.

With the continuing growth of the parish, Bishop O'Neill decided that a larger Co-Cathedral would be needed.  Prior to the construction, there were 4 masses offered a day.  Bishop O'Neill first announced his intentions of a new edifice on January 17, 1960 at all the Sunday Masses.

In late July 1962, the old presbytery was torn down to make way for the new Cathedral.  The Corner Stone was laid on July 17, 1963 following the morning Mass.  Three bells for the new Co-Cathedral were washed, blessed and consecrated by Bishop O'Neill on March 1, 1964.  The largest one weights 1680 lbs, has an F sharp tone and bears the inscription "Maria Immaculata".  The second bell weights 1170 lbs with a G sharp Tone.  It is inscribed "John Michael" in honour of Bishop O'Neill.  The third and last bell weights 870 lbs and has the inscription of "William Patrick" in honour of both Msgr. Finn and Msgr. Hogan.  It has a tone in A sharp.The bells cost approximately 10,000 dollars and were donated to the parish by Bishop O'Neill.

On June 1, 1964 at 6:50 a.m., the first5 mass was offered in the new Co-Cathedral by Rt. Rev. William P. Hogan.  On October 30th of the same year, a decree from the Holy See was issued stating the Diocesan change from Harbour Grace-Grand Falls to Grand Falls, elevating the Co-Cathedral to the Seat of the Diocese.

The new Cathedral was blessed and dedicated on June 29, 1965 by the Most Eminent Maurice Cardinal Ry, Archbishop of Quebec and Primate of Canada.  The Occasion also marked the Silver Jubilee of Bishop O'Neill's episcopate.  The larger stained glass windows, the marble altar, confessionals and stations of the cross were transferred into the new Co-Cathedral.  In the sanctuary area, six smaller oval windows were erected.  Three depicting the Holy Family and three depicting St. John, St. Peter and St. Michael.  Two small oval windows were placed over each exit door near the Sanctuary.  One of which depicts Bishop O'Neill's coat of arms, while the other depicts Pope Paul VI papal crest.   The total cost of the new Cathedral was $640,000.

History Of Churches Built On This Site

This present Cathedral is the latest in a series of church structures on this approximate site, dating back to a chapel which was built in 1907.  The first church was constructed in 1911. The mission of Grand Falls was raised to the status of a parish in June 1912, when Father William Finn was appointed Parish Priest.  In 1918, the original church was destroyed by fire.  Two years later, the corner stone was laid for a new church to be built under the direction of Father Finn, with help from people of all religious denomination.  It was early evidence of true ecumenism.

The 1920 church, of a concrete block construction, was ultimately replaced in 1965 by the present edifice.  It was in this same year that the church was raised to the status of a Cathedral as the seat of the diocese was moved from Harbour Grace to Grand Falls.   A Cathedral takes its name from the chair of the bishop, the catherdral, in Latin.

"All written content for this site has been used with permission from Jonathan Gaye, author of the book Immaculate Conception Cathedral Parish: Celebrating One Hundred Years of Faith, Hope, and Love Under Our Patroness, Mary 1912 - 2012, Grand Falls-Windsor, NL."